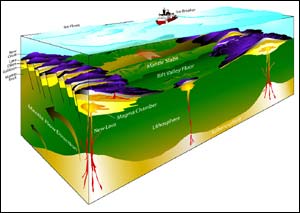 Scientists have discovered a new „ultra-slow“ class of ocean ridge involved in seafloor spreading. Investigations in the remote regions of the planet–in the far south Atlantic and Indian Oceans and the sea floor beneath the Arctic icecap–found that for large regions there, the sea floor splits apart by pulling up solid rock from deep within the earth. These rocks, known as peridotites (after the gemstone peridot) come from the deep layer of the earth known as the mantle.

Known ocean ridges, like the Mid-Atlantic Ridge and the East Pacific Rise, include regularly spaced volcanoes that continuously create a layer of crust on the seafloor. Mantle rocks are only rarely found along these volcanic ridges. Along the new class of ocean ridges, however, volcanoes occur only at widely spaced intervals and contain more sodium and potassium, among other chemical elements, than do typical mid-ocean ridge lavas.

According to marine geologist Henry Dick of the Woods Hole Oceanographic Institution (WHOI), this newly recognized class of ultraslow-spreading ridges constitutes a surprising 12,000 miles of the 30,000-mile global ocean ridge system. Dick, along with WHOI marine geophysicists scientists Jian Lin and Hans Schouten, have published their results in this week’s (November 27) issue of the journal Nature.

„These results are a wonderful example of the unexpected discoveries that often occur in science,“ said David Epp, director of the marine geology and geophysics program at the National Science Foundation, the federal agency that funded the research.

„This work will increase our understanding of mid-ocean ridge processes; marine geology textbooks will be rewritten,“ Epp said.

Seafloor spreading occurs at ocean ridges where new ocean crust forms along the margins of the earth’s great tectonic plates as geologic forces pull the plates apart. Elsewhere, the crust is destroyed as it is driven back down into the deep earth at island arcs and continental margins. Heat and mass are exchanged among Earth’s interior, oceans and atmosphere primarily through those processes.

Previously, earth scientists recognized only two major classes of ocean ridges: fast and slow. The first are half-mile-high ridges where hot magma from the Earth’s interior erupts to form new seafloor. Slow spreading ridges are marked by canyons more than a mile deep where the Earth is rifted apart with regularly spaced volcanoes.

The „ultra-slow“ class of ocean ridges creak apart at less than one inch per year. They also have a deep rift valley, but the ridge volcanoes are widely spaced between long stretches where cold mantle rock is pulled directly to the seafloor.

Fast- and slow-spreading ridges are formed by the linking of volcanic rifts and transform faults where tectonic plates slide past each other. On land, examples of such faults, such as California’s San Andreas Fault are major geologic hazards where earthquakes often occur. Such „transform“ faults are usually abundant on ocean ridges but generally give rise to weaker earthquakes because of thinner oceanic plates.

WHOI scientists found that transform faults don’t form at all in ultra-slow spreading ridges. Instead, the earth cracks apart between the volcanoes, heaving solid rock up onto the seafloor in any direction needed to fit the plate boundary. These „amagmatic accretionary ridges“ then link with the volcanic segments to form the ridge.

Basically, Dick said, you could describe fast, slow and ultra-slow spreading ridges in terms of the mantle temperature beneath them: hot, cool and cold ridges, respectively.

The intrusion of large peridotite massifs to seafloor is likely accompanied by their hydration to the rock serpentinite, which is sampled a lot along ultra-slow ridges. „Earthquakes are far fewer and smaller here than one would expect for an ocean ridge with such rough terrain“, said Lin. „One possibility is that serpentinite is weak and may have prevented the larger quakes. The deficit of large quakes on ultraslow ridges, then, may have important implications for understanding why portions of the San Andreas fault in California are creeping smoothly, while other segments have violently ruptured with large earthquakes.“

The discovery of this new class of ocean ridge may answer a major puzzle in plate tectonics: what the plate boundary looks like in the early stages of continental breakup and continental drift. According to Dick, it has been difficult to fit models for slow and fast spreading ridges with the seismic images of North American and European continental margins where the common land mass broke apart millions of years ago. Scientists are already noting similarities between the structure of ultra-slow spreading ridges and the deep structure of those continental margins. 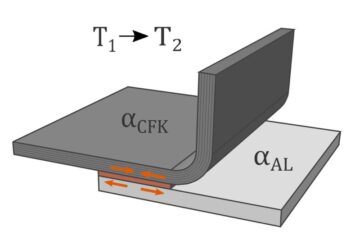 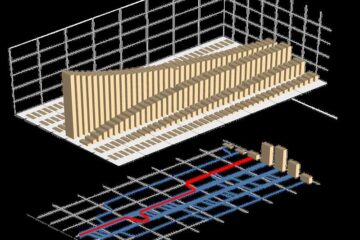 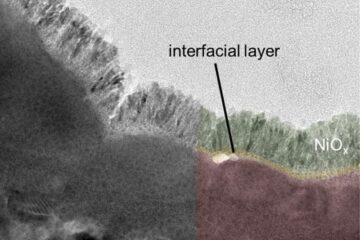