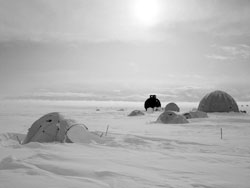 The recent analyses of eight ice cores drilled from the massive Greenland Ice Sheet may paint a map researchers can use to uncover the history of a massive weather machine controlling the climate around the North Atlantic basin.

The boundary between two major pressure systems – the Icelandic Low and the Azores High — controls whether storms reaching Europe are strong or weak, and whether the seasons are wetter or dryer. This phenomenon called the North Atlantic Oscillation, or NAO