Home / Sonderthemen / Förderungen Preise / Grant from the Moore Foundation for the development of a non-invasive Quantum Electron Microscope
11.10.2012

Among this year’s selected projects is the development of a quantum electron microscope, an instrument which would mean a big step for the investigation of biological samples.

Three groups will work on this project in a coordinated effort: the “Ultrafast Quantum Optics” group under the leadership of Professor Hommelhoff at the Max-Planck-Institute of Quantum Optics in Garching (Germany, near Munich) and Friedrich-Alexander-Universität Erlangen-Nürnberg, a team of scientists at Stanford University (Stanford, USA), and another one at Massachusetts Institute of Technology (Boston, USA).

Each group will receive financial support of 1.145 million dollars (roughly one million Euro) over a period of 40 months. The basic idea of this measurement principle is closely related to the pioneering work that has been awarded with this year’s Nobel Prize in physics, the work of Prof. Serge Haroche (Collège de France, Paris).

Electrons do not only behave like electrically charged particles but also show wavelike properties, as has been known for about a hundred years. At sufficiently high energies their so-called de Broglie wavelength lies in the nanometre to picometre range (10-9 to10-12 m). This makes free electrons extremely well suited for the imaging of biological structures, where a resolution on the atomic or molecular scale is reached.

Hence, electron microscopes are by now a standard tool in research as well as in technical applications. The catch downside of this method, however, is the high radiation dose applied to the sample that can damage its structure. For example, the dose consumed in the process of taking one single image is equivalent to the dose the cell would receive by a nuclear bomb explosion that takes place in a distance of less than 50 metres.

The scientists aim at avoiding this problem by applying interaction-free quantum measurements. The basic concept of this principle has been described for photons more than 20 years ago. It is generally assumed that the state of a quantum object gets altered or even destroyed as a consequence of its determination. The new principle puts this assumption “upside down”: it is not the state of the object which gets disturbed; instead, the quantum properties of the observer are influenced by the mere presence of the object. The concept was experimentally realized in the team of Prof. Serge Haroche. The group used microwave resonators whose resonance conditions get changed if a single atom is trapped inside. Hence, the transparency or opaqueness of the resonator gives information about the presence of the atom – without destroying its quantum state, because the object does not interact directly with the photons.

Now the plan is to extend this principle of interaction-free quantum measurement to the use of free electrons. Here, the electron beam will not be launched directly onto the sample surface, as in a conventional electron microscope. Instead, the information on the properties of the sample will be deduced from the influence the object has on the quantum properties of the electrons, in analogy to the effect the atom mentioned above has on the optical properties of the resonator. Such an electron resonator could, for example, be made from two ring-like traps for free electrons arranged on top of each other in a short distance. An electron which circulates in the upper ring is, according to quantum mechanics, allowed to tunnel to the lower ring with a certain probability, and tunnel back, and so on. But once an opaque object is inserted into the lower ring – for example a biological sample stained with gold particles – these oscillations get stopped.

“Our first step will be to demonstrate that the interaction-free quantum measurement principle indeed works with electrons. We have already accomplished some of the most important technical requirements – wave guide structures for the controlled steering and manipulation of the quantum properties of electrons,” Prof. Peter Hommelhoff explains. “The development of a microscope that will image biological samples non-invasively and with high resolution will be the next step. Such a quantum electron microscope would reduce the radiation dose consumed in the sample by a lot, thereby avoiding the damage of its structure. It would be a truly fascinating goal to make movies from living cells with the new device – with the spatial resolution of an electron microscope.” 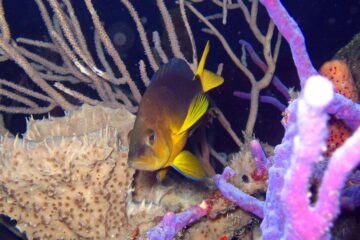 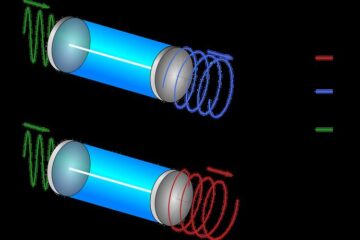 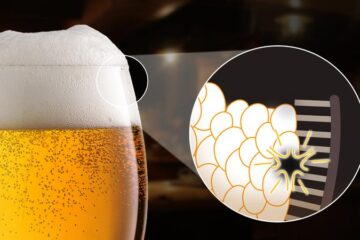