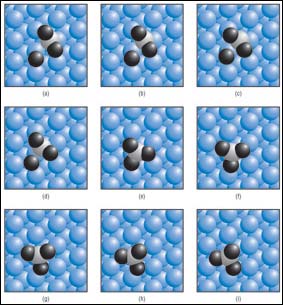 Based on quantum mechanical calculations, MIT researchers have developed this series of pictures showing how sulfur dioxide on a platinum catalyst converts to sulfur trioxide—a compound that poisons advanced catalytic converters for new fuel-efficient engines. Platinum atoms of the catalyst’s surface appear as blue spheres, oxygen atoms are black and the sulfur atom is white. In successive pictures, a single oxygen atom approaches and eventually joins onto an existing sulfur dioxide molecule to form sulfur trioxide. <br>IMAGE / LABORATORY FOR ENERGY AND THE ENVIRONMENT

MIT researchers affiliated with the Laboratory for Energy and the Environment are gaining atomic-level insight into how sulfur in engine exhaust “poisons” advanced catalytic converters, reducing their ability to remove noxious emissions from car engines. Understanding that process is a first step toward preventing it, thereby making viable new fuel-efficient engine designs.

“Removing sulfur from fuel is difficult and costly, so we need to develop a sulfur-resistant catalytic converter that will work with the lean-running engines now being designed,” said Bernhardt Trout, associate professor of chemical engineering and principal investigator of the work. “Lean-running engines operate with excess air and are highly efficient, which means low fuel consumption and low emissions.”

The work focuses on a promising catalytic converter with two components: a platinum catalyst that converts carbon monoxide and hydrocarbons in exhaust to carbon dioxide and water, and a barium oxide “trap” that captures nitrogen oxides. The converter thus controls emissions that can harm human health and contribute to the formation of smog and acid rain.

However, with excess oxygen present, sulfur dioxide in the exhaust reacts on the platinum catalyst to form sulfur trioxide. The sulfur trioxide then coats the barium oxide trap, so it can no longer do its job.

“Our goal is to stop the reactions that turn sulfur dioxide to sulfur trioxide but without interfering with the reactions that clean up carbon monoxide and hydrocarbons,” said Trout. “That’s challenging because all of those reactions involve the same process—adding an oxygen atom to an existing molecule.”

Achieving “selective oxidation” is next to impossible using traditional trial-and-error experimentation. So the MIT researchers are using quantum mechanical calculations to determine on an atomic level the reaction process by which sulfur trioxide forms. Calculating the behavior of all electrons during the reactions of interest is a computationally intensive procedure that they perform on supercomputers at the National Computational Science Alliance at the University of Illinois at Urbana-Champaign.

Based on their analysis, Professor Trout and his team have developed a series of pictures that show the step-by-step process whereby a single oxygen atom on a platinum surface approaches and eventually joins onto an existing sulfur dioxide molecule to form sulfur trioxide. Other calculations show the energy consumed or released at each step as chemical bonds break or form.

The researchers are now using their new atomic-level understanding to perform larger-scale simulations that can predict how sulfur and oxygen atoms will move, interact and react to form new molecules under realistic conditions. Simulations thus far suggest that oxygen atoms will cluster together—a behavior observed in experimental systems.

Professor Trout and his team are collaborating closely with experimentalists to try to understand the clustering process and whether steps to either encourage or discourage clustering may interfere with the formation of sulfur trioxide. 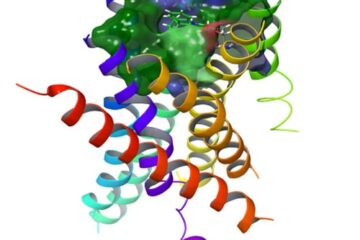 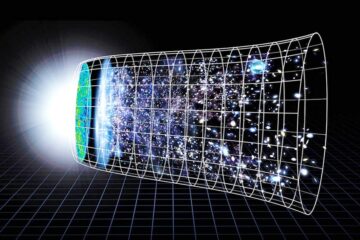 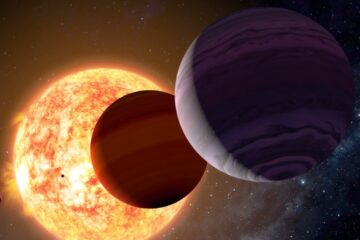